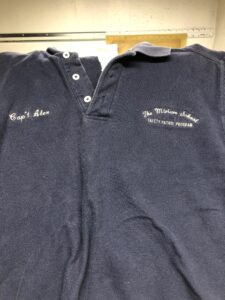 Miriam School Alum Alex Bower-Leet shares his thoughts on the heroes whose lives were lost on 9/11/01 and how that has impacted him – along with his experience as a Miriam School Safety Patrol Captain back in 2001-2002.

Last school year I made three commemorative ribbons honoring two firefighters from the FDNY (New York City Fire Department) and a paramedic. These three selfless people went above and beyond on the morning of 9/11. All of my students were intrigued by these commemorative ribbons. Since remote learning is happening, I figured this year to honor and reflect on what is now the 19th anniversary of 9/11 I would do a digital commemoration.

During the 2001-2002 school year I was honored as being my school’s Safety Patrol captain. This was a life changing experience, especially the year when it happened. Whether you’re familiar or not with this program, it was basically being a hall monitor, assisting with morning and afternoon carpool duties, as well as hoisting the American flag, state flag, and school flag then taking it down each day when school let out. This was a program where I learned how to lead by example, and most of all I learned strong leadership skills that have helped with my profession and in life.

As the school year was starting to wind down, I remember being in my school’s office gathering both the American, Missouri state flag, and our schools’ flag. Once I arrived into the office, I was greeted by my wonderful 7th grade teacher and two of our school’s administrative assistants. My teacher noticed me gathering my items and grabbing my bright orange safety vest with my captain’s badge on it. She then looked at me and told me that she and her husband watched the same documentary I watched with my family about a group of firefighters profiled and the rookie firefighter before and during 9/11 and afterwards.

Before school ended that week I remember telling her about this documentary and how I wanted her to watch this. She promised me she would, then as I prepared for morning Safety Patrol, she gave me one of the biggest and nicest compliments anyone has given me by saying “Alex, you to me were that rookie firefighter. You remind me of Tony always willing to help others, and just remember to be like him.” To this very day that compliment has stood with me and I am forever thankful for my teacher during that school year.

I want to honor the brave and selfless 343 firefighters from the New York City Fire Department that sadly died on 09/11. All of you inspired me on that day to learn what true heroes do, lead by example, and what bravery looked like while fighting thru adversity. Thank you for your bravery and inspiration over the years. As well as the 23 members of the New York City Police Department who gave their lives, and the 37 selfless members of the Port Authority Police Department of New York and New Jersey. All of you continue to inspire me each day by going beyond the call of duty, and the strong selfless courage you showed on 9/11 and even to this very day. Your memory and legacy shall never be forgotten and always should be honored each anniversary going forward.

In case you are wondering what documentary I was referring to, it was “9/11” directed by French filmmakers Jules and Gedeon Naudet along with their firefighting friend James Hanlon.