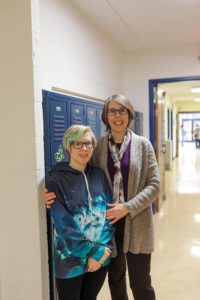 We knew Miriam Academy was the right place for Daria right away.  Soon after she spent the day shadowing, Daria wanted to go back for a second day.  She immediately connected with the other students, and was warmly welcomed by the teachers and staff.  It was clear this was the high school for Daria.

We were living in California at the time, but moved back to St. Louis so that Daria could attend Miriam Academy as a sophomore.  I grew up in St. Louis and moved to San Diego for a career, later adopting Daria and her brother from Russia.  After many difficult challenges in public schools there, it was time to come home to St. Louis so Daria could finally go to the right school.

During her two and a half years at Miriam, I have seen Daria’s self-esteem increase and noticed she is more comfortable with her learning differences.  Miriam taught her how to speak up and advocate for herself. She has learned leadership skills and empathy for others and this is huge!

Miriam Academy truly honors the whole student and understands how each student’s differences are to be embraced.

Miriam Academy has been the best school for Daria both academically and socially.  She served on the student council, was nominated to the National Honor Society, and played on several of the sports teams.   She has also enjoyed several internships at local businesses.  These are all new experiences made possible by being at Miriam.

I feel so blessed to have found Miriam Academy for my daughter.  As she prepares to graduate in the spring, we are exploring different options for school and career.  Miriam is helping us with this transition and we feel supported.

The small size of the school, along with the commitment and quality of the teachers and administration, plus the friendly and accepting students, all make Miriam Academy our incredible community that we are proud to be a part of.