I still remember the initial nervousness I felt when my then five-year-old son Xavier attended a two-day trial session in Miss Angie’s class at Miriam School. Would he react well to the other children? Would he be able to communicate effectively with his teacher and the therapists at Miriam? Would he develop the strong friendships that every parent hopes for their children? The answer to all of these questions eventually became yes! 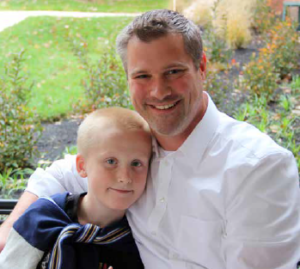 Though Xavier was a happy and affectionate child, he had difficulty communicating verbally. He also had problems dealing with his emotions and with normal auditory processing. My wife Candice and I eventually sought out a neurologist after several developmental milestones were missed. In the summer of 2010, Xavier was diagnosed with autism.

After careful consideration, we made the decision to send Xavier to Miriam School and he began in the fall of 2014. We felt that Miriam had the right structure in place to meet all of his needs, whether academic, social, sensory, or therapeutic on a daily basis.

Today Xavier is a happy, confident 10-year-old boy who enjoys playing with the friends he has made at Miriam. He is able to effectively express his feelings verbally to his teachers and friends. A big factor in Xavier’s success is the small class size and attention he gets at Miriam. The teachers have the privilege to devote more individual time to each student and can appropriately assess and meet the needs that will make each student successful.

One of our son’s favorite things at Miriam is the yearly talent show. Last year, Xavier participated in the magic show. It’s incredibly exciting to see your child have confidence and watch that self-assurance translate into other areas of his life. Miriam is really a special place because there is a priority placed on the amount of time spent with each student whether in the classroom, in therapy, or in the many activities that occur during the day. Miriam is more than just a school: it is a place where children can thrive in an atmosphere that embraces different ways of learning while nurturing each student.