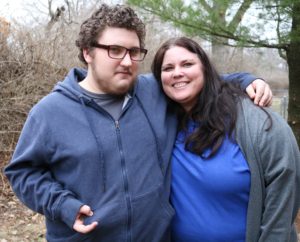 My son Devlin is the bravest person I know. When he was just two and a half years old, he was diagnosed with autism. Though he didn’t have much language, we were able to come up with a game plan and he did fairly well in a special education classroom.

Everything changed right before his fifth birthday when Devlin was hit by a car. Both of his legs were broken and this beautiful tiny child of mine was in a body cast from the waist down. It was heartbreaking, but this tragedy brought about language and he began to blossom. Less than six months later, Devlin would have to have his femur rebroken and go through the mending process again. On the bright side, his speech continued to improve during this time.

Devlin entered kindergarten in a new classroom for children on the spectrum and we were hopeful, but he was then diagnosed with ADHD. This was tough because he needed medicine. While Devlin did well in a special education classroom, he was later mainstreamed into a typical classroom and he got little support.

The older Devlin got, the more he stood out from his peers. It was tough finding a place he “fit.” The special classrooms were no longer a good fit and the traditional classroom setting was getting harder every year.

When Devlin was 11, he was diagnosed with anxiety and it was pretty debilitating. Crowds would throw Devlin into panic attacks and he became more isolated with few friends. I was so worried about him and I knew something had to change.

One day my aunt said she had a friend who knew a teacher at Miriam Academy and recommended I talk to humanities teacher Chris Holmes. I spoke to Mr. Holmes and he suggested I tour Miriam’s new high school. I wasn’t sure about moving, but I agreed to come look at Miriam Academy and soon everything changed.

I was overcome with emotion when we toured. I cried because I knew Devlin belonged at Miriam Academy. When he was accepted, we picked up and moved to be closer to the school.

Devlin warmed up far quicker than I expected. He became more and more himself again. He gets in the car happy, laughs and he feels good about himself. I haven’t seen this side of Devlin in a long time and it is so refreshing.

When I drop Devlin off in the mornings, I sometimes find myself tearing up because I am so thankful for Miriam. The staff not only understands him, they embrace him. Devlin thinks outside of the box and the teachers at Miriam know how to encourage him. I love it!

As a single parent, I have always worried about what would happen to Devlin when I am gone. But his experience at Miriam has given me confidence that Devlin has a chance at a really great life, with friends and love. Miriam is the difference between surviving and thriving. We are so
thankful and I am so proud of Devlin, my true hero.