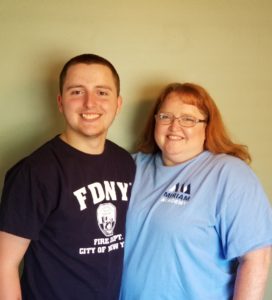 When my son Austin was in middle school, I knew he was going to need another option for high school. I started doing some online research and came across a Facebook ad for Miriam Academy and clicked the “Learn More” button. I never would have guessed how much that button would change our lives! We did a school tour and our first thought was Austin should have been in a school like Miriam all along.

It all started at just a few weeks old when Austin had asthma and severe allergies and was later diagnosed with ADHD in kindergarten. He could keep up in the younger grades socially and academically, but as he got to upper elementary and middle school the differences were dramatic. His grades declined because of his learning and social disabilities and he was bullied. He still deals with some of the lasting effects today.

Since enrolling Austin in Miriam Academy’s first freshman class almost two years ago, we have seen huge progress! He started school totally discouraged and afraid to trust the teachers and other students, but realized that Miriam Academy was a safe place for him and he began to like school.

The Academy’s humanities teacher, Mr. Holmes, really helped to pull Austin out of his shell. Mr. Holmes encourages Austin and even when the words have to be tough, Mr. Holmes always treats him with respect.

When I asked Austin the main reason he likes Miriam he said “It gives kids a second chance.” The Academy has completely changed how he feels about school. He likes the teachers, kids, and the safe feeling school gives him.

Austin loves being on the Academy’s baseball team and is doing a summer internship at the JCC this summer as a camp counselor and is excited to get his first paycheck. He wants to be a firefighter/ EMT and is a volunteer Explorer Fire Fighter through the Berkeley Fire Dept. Austin is very close to getting his driver’s license and is looking forward to his junior year at Miriam!

Miriam Academy has given Austin a chance to experience some of the things that he would see at any high school from clubs and internships, to sports and social events. I appreciate that families are so involved in the school too.

As a parent, I now see HOPE! My son is excited about school again and that makes me happy. There are still some bumps in the road, but the bumps are easier with the Miriam community of teachers, staff and families behind us.