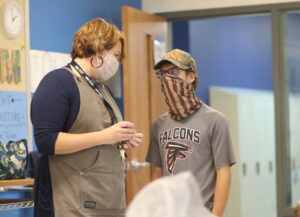 Teresa Basler knows that when she drops her son, Anton, off at Miriam Academy each morning, he is right where he’s supposed to be.

Anton, a sophomore, is in his second year at Miriam. His parents knew his large public middle school was not meeting his needs, educationally or socially. They attended an open house for Miriam Academy and were impressed by the small size, the staff and the opportunities. “This was our ah-ha moment,” Teresa says. “We left the decision up to Anton, and it was one of the best decisions we’ve ever made.

She says Anton likes the calm routine at Miriam Academy, the small classes and the independence – a stark difference from his middle school, which he found overwhelming. He has made connections with his teachers, and he has developed a social life. “He HAS friends now. That’s huge,” Teresa says.

She says she and her husband, Danny, were amazed at Anton’s first parent/teacher/student meeting. “He was so confident, happy and talkative for a teenage boy. His teachers shared with us how much change they saw in him from the start of school until November. I cried. It completely confirmed that we made the right choice for him and his future.”

Anton loves hands-on activities, including working in the Art Studio, playing on the basketball team and going bowling with school. In fact, his mom says he may end up in a career where he uses his hands, such as farming or mechanics.

For now, though, Anton is enjoying being a high schooler at Miriam. He is happy to be back in person, after distance learning in the spring. He loves interacting with his teachers and friends, and he has adjusted well to the new school building.

Teresa says that from a parent’s perspective, the staff and teachers are what make Miriam unique. “From the moment you meet any of them, you can immediately tell they care about your child. They will do what is best for your child first, and then what’s best for their education and future. There is a sense of positivity. They set an environment for your child to flourish.”