‘I love Miriam because they never gave up on Lily.’ 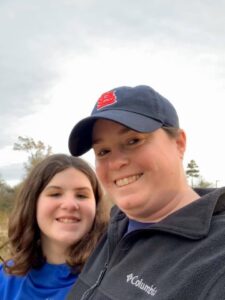 As an educator and assistant principal at a local elementary school, my journey to Miriam is filled with so many emotions, including frustration and embarrassment, but ultimately with hope for my daughter and her future.

My daughter Lily, now 12, was diagnosed early on with a variety of learning challenges along with ADHD, OCD, social anxiety and autism. She continually struggled in school and fell behind. Lily also exhibited some behavior issues that really made things even more difficult, because she attended the school where I am the assistant principal. I knew we had to find the right learning environment for Lily.

Fortunately, I had a friend whose son attended Miriam School, and I called to set up a tour. I fell in love with Miriam School right away! I knew the small class size, the OT room, the calm atmosphere, and the amazing staff were the perfect fit for Lily.

Lily spent two days shadowing and came home so happy each day. For the first time, she said, “I now have friends.” It was incredible to hear these words from her for the first time.

We were very ready for her to start school at Miriam, however it was the middle of the year and the school was full. Lily had to finish one last semester at her previous school…but did her best to get kicked out. That’s right, Lily wanted to go to Miriam so much that she tried to get kicked out of her public school.

Lily started at Miriam in 2018 in fifth grade, and it has become like home. Now having finished her second year, I have seen her grow so much both academically and socially. At her old school, she refused to write, but now her writing skills have really taken off. In math, she has learned her multiplication tables and division facts. For the first time, she comes home talking about what she learned that day. Because of Miriam School, Lily wants to learn.

Socially, Lily has learned how to be a friend and maintain friendships. She can now go up to kids in our neighborhood and start a conversation. She has come a long way from the kid who wasn’t invited to a birthday party or a play date, to having lots of friends.

Lily feels safe at Miriam and loves her teachers. She knows the teachers and staff understand her and are always there to help. Lily’s favorite thing at Miriam is the OT room because it calms her down and takes her mind off any problems, plus she sees her friends there.

I love Miriam because they never gave up on Lily. The staff knows how to work with each child and build on their strengths. Teachers are there to problem solve, and they include parents as part of the team. Everything at Miriam is a teachable moment. It is a special place, and I hope that other parents who have a child who is struggling in school can take advantage of all Miriam has to offer.