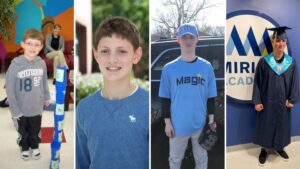 When Kaden was ready to start kindergarten, his parents discovered Miriam and hoped it would meet his special needs and allow him to thrive in school. Twelve years later, Kaden graduated from Miriam Academy with a solid educational foundation, confidence, and the ability to advocate for himself and his needs.

Kaden was the first to attend Miriam for kindergarten through 12th grade. Our high school program, Miriam Academy, opened six years ago and provides the opportunity for students to continue their Miriam education past eighth grade.

At Kaden’s May 2021 graduation ceremony, he was presented with a keepsake box. He says he keeps it on his dresser – and inside is the Miriam School Key that he received at his eighth-grade graduation.

Kaden says all of his teachers and therapists at Miriam were committed to bringing out the best in him. “They helped me be successful and proud of myself,” Kaden says. One teacher, Brandi McKenney, helped him love math, after previously not being comfortable with the subject.

Mrs. McKenney, in turn, says Kaden was a very hard worker – and always polite and inquisitive. “I always knew what he needed, because he was a great self-advocator.”

Kaden’s favorite thing about Miriam was the friends he made. “I got to go to school with and hang out with friends that were a lot like me,” Kaden says. “A lot of my friends had the same interests as me, and every day was fun as well as challenging. I still talk and text to many of my friends often.”

What were Kaden’s parents’ impressions of Miriam throughout his 13 years here? Check out the Q&A below with Mandy and David Berg.

Q. What led you to search for a school like Miriam?

A. From very early on, we recognized the need for an early childhood education program that could offer a comprehensive strategy of education, speech and outpatient therapies. Early experiences at Howard Park Early Childhood Center introduced us to the huge benefits of education with expertise in all forms of learning special needs. Teachers at Howard Park felt Kaden would be a great candidate for Miriam School. He entered their program at the age of 5 and began his formal tailored education with daily resources in speech and occupational therapy. This provided a comprehensive curriculum that would serve as both basis and launchpad for Kaden’s future.

Q. What did you find at Miriam? How did Kaden overcome some of his challenges?

A. At Miriam, we found a very modern, inviting school with resources including a large sensory room, a playground and a lunchroom. The staff was always happy and inviting, and they worked as a team with the common goal of providing for each individual’s needs. Each therapist worked hand in hand with each other and the classroom teacher. This allowed everyone to work in tandem and focus on any special areas of need. This resulted in faster results and a high level of success and confidence for Kaden. The small classroom setting allowed Kaden to form friendships and bonds that continue to this day.

Q. Why did you keep Kaden at Miriam? Did you always know he would be here for his full primary and secondary schooling?

A. We kept Kaden at Miriam, because it remained the best fit for him as far as comfort and education. Kaden really liked the schools. We reassessed from year to year, with no intent of staying the course if a better opportunity arose. Happily, Miriam continued to excel at its efforts to make Kaden’s scholastic experience fulfilling.

Q. What were the benefits of Miriam for Kaden?

A. Kaden benefited from an individualized and tailored education that was able to meet all his needs. Also, Miriam Academy offered a large variety of extracurricular activities to round out his high school experiences.

Q. What has been the best part of your Miriam journey?

A. Without question, it’s watching Kaden’s confidence grow, both as a student and a person. He took great pride in working hard and achieving things he likely never thought possible. His Miriam experience gave him all the tools he needs to take life head on. Miriam Academy was a challenge for Kaden academically. He worked hard and was a member of National Honor Society for his time there.

Q. What emotions were you feeling when he graduated in May?

A. You would think we would have felt a bit of anxiety, as such a big part of his life is over. In fact, the only emotions were unparalleled wonder and pride!