“The fact that Miriam not only addresses the unique needs of its population, but also
celebrates them, is a gift to Lauren and all of the families who are part of this community.”
~ Larissa Amrein 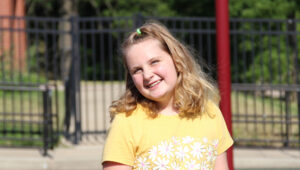 Larissa and Todd Amrein say that after touring Miriam a few years ago, they felt such a sense of relief just knowing that a school like Miriam exists. At that time, their daughter Lauren was still receiving the services she needed at her public school – but they knew that they could turn to Miriam if anything changed.

“As Lauren got older, it became harder to qualify for the services she needed,” Larissa says. “And as the grade levels progressed, she was expected to meet the same set of expectations that a general classroom teacher has for a full classroom of students. This became increasingly difficult, and school became a significant source of anxiety for Lauren.”

Larissa and Todd hated seeing Lauren so anxious about going to school each day, and they knew something needed to change in order for Lauren to find success.

One aspect of Miriam that has benefited Lauren is the integrated speech and occupational therapies. Previously, she received private therapy after school. She also received pull-out services at school, but Larissa says Lauren was just left on her own to try to implement what she learned when she returned to the classroom. At Miriam, she has wrap-around support that carries through every therapy session, academic lesson and social skills group.

Lauren started at Miriam at the beginning of the 2021-22 academic year. Larissa said they saw a significant decrease in school anxiety – and therefore, Lauren has been able to focus better and perform well academically.

“One of the most incredible improvements I saw in Lauren through her first year at Miriam was her confidence in herself,” says Maria Witt, Lauren’s teacher. “By the end of the year, she was able to advocate for herself, ask for breaks, and really begin to understand how her brain works. Her parents are wonderful partners with me, and I think that also made a huge difference in Lauren’s success.”

Larissa says Lauren loved being in Mrs. Witt’s class, and she was even sad on the last day of school to leave all of her teachers for the summer. “That was a first!” she says. Lauren also made several good friends during the year, and she’s looking forward to seeing them when school starts!

Larissa says she could tell from the start that Miriam is a place that cares about its students and supports the whole family. “All of the staff who presented at the information session, and with whom we engaged over the following months, were so professional, incredibly helpful and compassionate,” she says.

“I also spoke to several current Miriam parents as we were making our decision, and we were so grateful for their willingness to be open and honest about their journeys. It all spoke volumes about the community here at Miriam.”