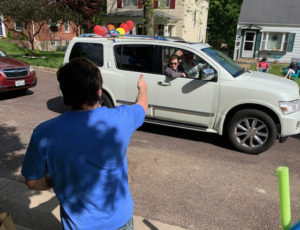 Last Friday, Miriam Academy junior Adam Rhea was treated to a 17th birthday party like no other. Due to the current health situation, Adam’s friends from Miriam Academy came together in an incredible car parade along his street. Adam and his family were overwhelmed with happiness as friends and family members drove by with cars decorated with signs for Adam, plus lots of honking and well wishes from a safe distance.

His mother, Stephanie, said that the birthday parade was so important because it is the first year Adam has had enough friends to actually have a party. “We wanted to have a birthday party for him with the whole school, which would be a first,” Stephanie said. “But a parade like this reminds him that for the first time, he truly has a group of real friends.”

Stephanie explained the huge impact that Miriam Academy has had for her son:

“Miriam has been the best thing that has ever happened to Adam. He doesn’t just go to school, he belongs there!”